History of the Course Design

In 1908, the club’s founders approached Dr Alister MacKenzie, who in partnership with Harry Colt was nearing the completion of the nearby Alwoodley Golf Club, to design one test hole, the legendary ‘Gibraltar’, with the aim to attract members. Very shortly after he was invited to lay out the full eighteen holes (with the intention of playing nine of them as soon as possible) on the land at Black Moor, which had just been leased from the Lane Fox Estate.

Features of the original heathland course at Moortown which received much comment were the bunkers, being perfect examples of artificial hazards, imitating natural seaside contours. Secondly was in the green design, where Dr MacKenzie adopted the larger, undulating seaside greens. Dr MacKenzie who often chaired many of the early meetings, was elected a Vice President in 1909, and in 1913 he was Captain.

As the club leased more land, and the holes re-shaped, he continued as constructional adviser and active Vice-President for several years. However in 1928, by which time Alister was working mostly abroad, the club turned to his younger brother, Charles, to act as a course consultant, a role in which he continued to serve until 1933. It was then that the Green Committee decided that the need for a consultant no longer existed as “the course has now been got more or less in its final form”. 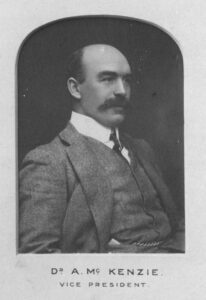 Dr Alister MacKenzie is unquestionably one of the world’s foremost golf course designers. Examples of his work are amongst the best in the world and he was to lay out many world famous courses both here and in the United States, including the world famous Augusta. His book “Golf Architecture” has become a standard text for budding golf course architects. Dr MacKenzie has proved that it is entirely possible to construct a course that will provide interesting yet not unreasonable problems for every golfer according to their skill. Every year the Club receives many enquiries but some of the most recurring are questions relating to the life and work of Dr MacKenzie and his influence on Moortown’s development.

Dr Alister MacKenzie’s first course design was at Alwoodley in Yorkshire, followed by Moortown, Sandmoor, Sitwell Park and the Eden Course at St Andrews.* In 1926 his famous “World Tour,” expanded his reputation around the world. He took the long way, through the Suez Canal to Australia, where in a period of two months, he advised 19 principal clubs, from which visit arose such magnificent courses as the Royal Melbourne and Royal Queensland, and in New Zealand, the courses at Titirangi and Queenstown. He designed the two courses at the Jockey Club at Buenos Aires and Mar De Plato in Argentina. In 1927 before returning to California to design the Cypress Point course on the Monterey Peninsula, he was called to remodel Lahinch, and other courses in Ireland.* Whilst in America with Robert Hunter, they built the Valley Club at Montecito, the Meadow Club on Mt Tamalpis, and did redesign work on the famed course at Pebble Beach. Many of his courses still remain among the top 100, Cypress Point, Pasatiempo, Crystal Downs, Royal Melbourne and the home of the Masters, Augusta National.*