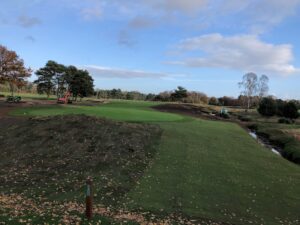 has allowed the team to progress well with the work on the 5th hole.

The green surround and greenside bunker banks have now been re-turfed and focus has move to the fairway extensions where old turf has been stripped, exposing 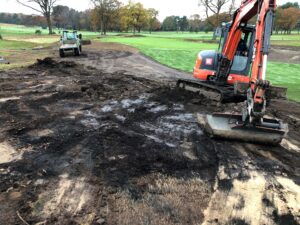 the peat. Sand has been added to the peat and the ground rotovated which helps improve the drainage of the land 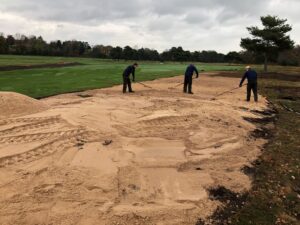 whilst rectifying levels readying the area for new turf to be laid. 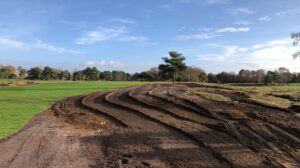 Although a very similar styled hut can be seen positioned in the middle of the course during the 1929 Ryder Cup, the first picture we have of the starter’s hut in its present position w 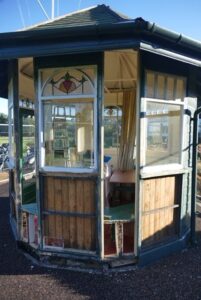 as taken during the Captain’s drive-in of 1934.

87 years later the hut and the weather vane were in drastic need of refurbishment and so member Peter Holmes and his team along and member, Mike West set about completely restoring the structure to its original state.

The new exterior had to be matched exactly to the old and so Siberian Larch slats were machined to follow the original moulded form and then individually cut to length thus allowing new slats to replace the old.

On the South West elevation the starter’s window, through which score cards would have been handed out, had long since ceased to operate. A new sash window was made, its pulley system re-built and a huge lead weight was attached by rope to, once again, balance against the weight of the window when open.

The roof was fou 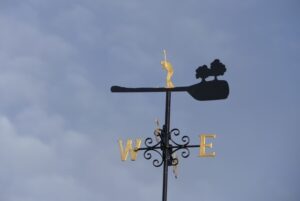 nd to be in a sound condition so only the hip flashings have been replaced and whilst the original seating has been retained, the interior has been re-lined and painted.

Mike West has superbly refurbished the weather vane. New bearings have been fitted and the four compass points, along with the golfer and his ball, have been highlighted in gold leaf. No excuse now for not knowing the wind direction when you tee off. 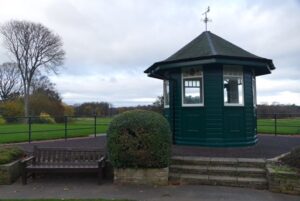 Our thanks must go to Peter and Mike who have most definitely given a new lease of life to one of our club’s iconic structures.

As we come to the end of week 4 of the 5th hole project, work is progressing well with the team working hard to stabilise the base of the new greenside bunker whilst also preparing the green surround ready for turf. 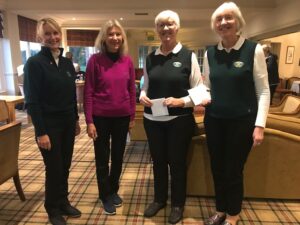 Congratulations to MGC members Susan and Patsy Mannion who took top spot in NLLGA 2nd round at Moortown, they were winners of the alliance with 35 points over 16 holes on Tuesday 2nd November.

Some fantastic scoring with the winning pair of Tom Brook and Adam Barnard round in a superb 63 gross better ball score for 44 points. Mens 4BBB Open Results 2021

Members and Visitors are welcome to spectate on all of the competition dates. (No Admission Fee)

Parking will be available in the overflow car parks on the practice ground or next to the 9th tee as the main car park will be restricted to players and officials only.

The Clubhouse and Halfway House will be open each day and will be available to both players and spectators.